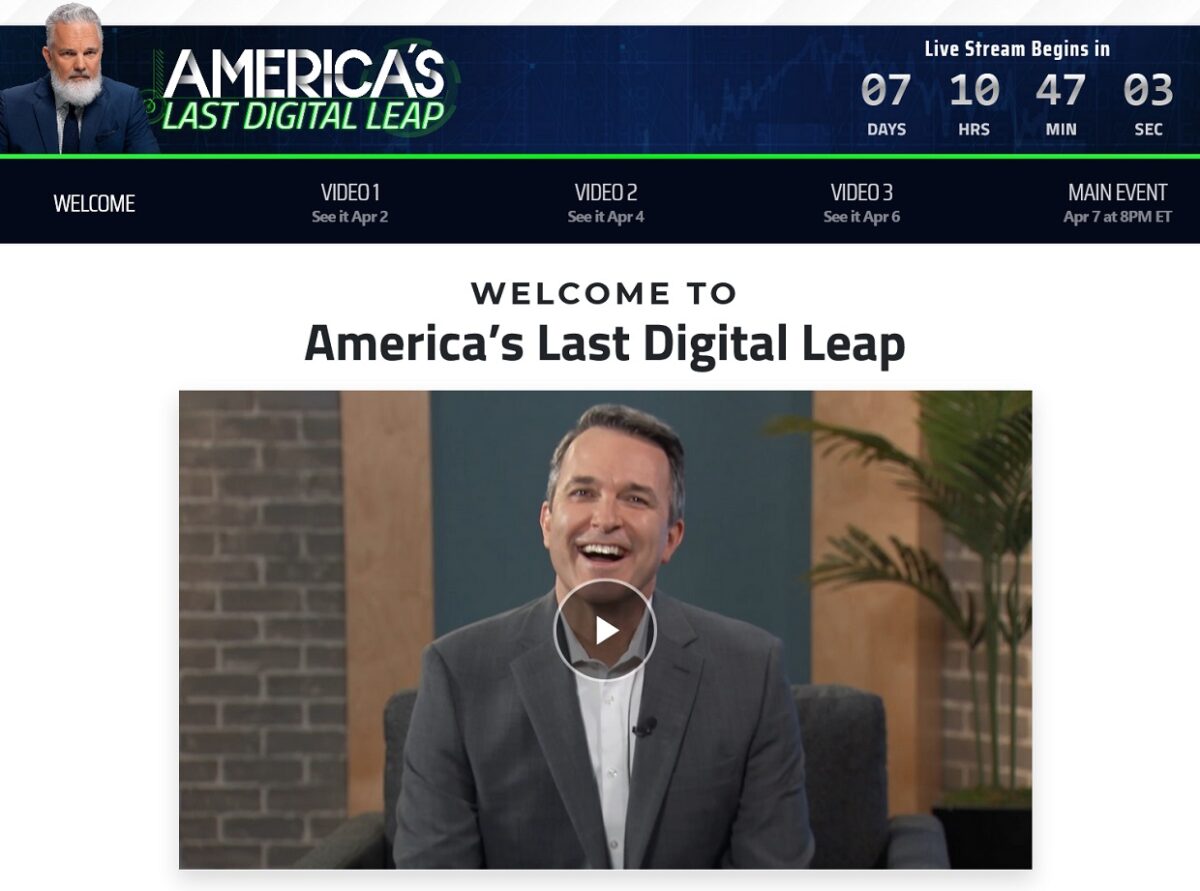 Let’s look back to this time last year…

It was just over a year ago — in March 2020 — that we experienced one of the worst market crashes in recent history. In the wake of COVID-19, governments were instituting strict economic lockdowns. With all the uncertainty, investors were panicking.

All the major indices were in free fall.

On March 9, the Dow experienced its largest one-day plunge in history up to that time. But that record was broken on March 12 and again on March 16.

That’s right. The three biggest one-day losses for the index all happened in March 2020.

The mainstream press was predicting an economic dark age. And many investors were rushing to liquidate their entire portfolios.

It was a very stressful time. But all Jeff Brown’s readers should remember what he said next. Jeff said that we should not panic.

Here’s what he said to all of his subscribers on March 17 of last year:

First of all, and most important, things are absolutely going to get better. I know it’s a very uncomfortable time in the market.

In fact, I can remember in the past 45 years only three times that were like this. I’m talking about the notorious Black Monday, the period right after the tech bubble bursting, and of course during the financial crisis of 2008 and 2009.

But one thing is consistent with all three of those crises. They were some of the best times to invest in the stock market. They provided the best opportunities for the largest gains.

Jeff went on to make what was probably a surprising announcement. We would be removing all our stop losses. And we would even take the opportunity to “go shopping” for some incredible companies trading at a relative bargain.

That was a controversial decision. Jeff Brown got pushback from several readers and even some of his colleagues.

By the end of 2020, Jeff Brown’s model portfolios had more than rebounded.

In his large-capitalization research service, The Near Future Report, he closed out the year with an average return of 80% on open positions. And he enjoyed a staggering 124% average return on closed positions.

So how he did that?

It wasn’t that he was lucky.

Jeff just knew something that most investors didn’t…

The Year of “Digital Leaps”

Of course, we knew that the economic lockdowns would be terrible for some businesses.

The hotel industry suffered. Airlines had to be bailed out. Cruise ships sat dormant at their ports. And Hertz — the iconic rental car company — declared bankruptcy.

But this new world was a boon for a select group of technology companies.

Specifically, Jeff Brown is talking about companies that were enabling what he calls “digital leaps.”

Let’s look at an example…

In May 2020, Jeff recommended to his readers to invest in a company called Infineon. This was during the strict economic lockdowns. Many investors were still avoiding stocks altogether.

But Jeff knew that Infineon was enabling a digital leap in the automotive industry.

Right now, carmakers are rushing to adopt electric and self-driving technologies. And with a world-wide pandemic, driverless cars have never been more important.

As a key supplier to the EV and autonomous vehicle market, Infineon was a great way to get exposure to this digital leap. 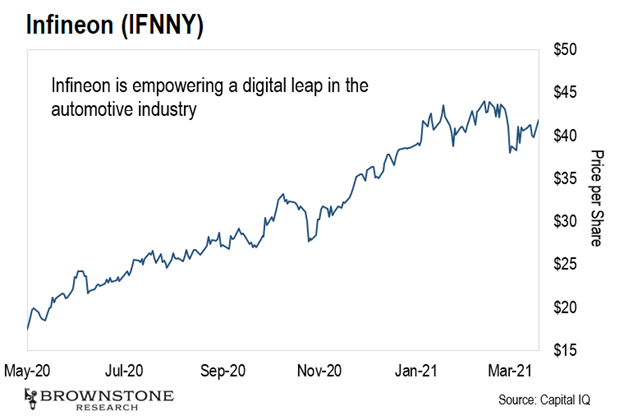 Square is a company enabling a digital leap in the payments processing and peer-to-peer payments space.

Because of the pandemic, businesses and consumers were rushing to adopt digital, contactless transactions.

And thanks in large part to Square’s Cash App, this stock was a great way to play this trend.

Jeff Brown and his subscribers are up 182% with Square in the model portfolio. And notice how the bulk of the returns were seen after the economic lockdowns were put into place. If they had sold Square during the fear-induced sell-off, that return would have been off the table. 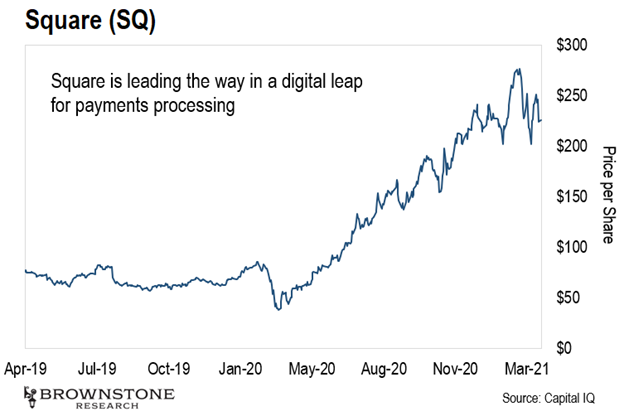 DocuSign is enabling a digital leap for business contracts.

The company’s technology allows us to electronically sign documents without ever visiting an office or handling physical paperwork.

It’s been a great stock to own.

Jeff Brown’s model portfolio is showing 275% returns on this one position. And again, look where we see the sharp incline in the share price. The stock took off in the months following the economic lockdowns. 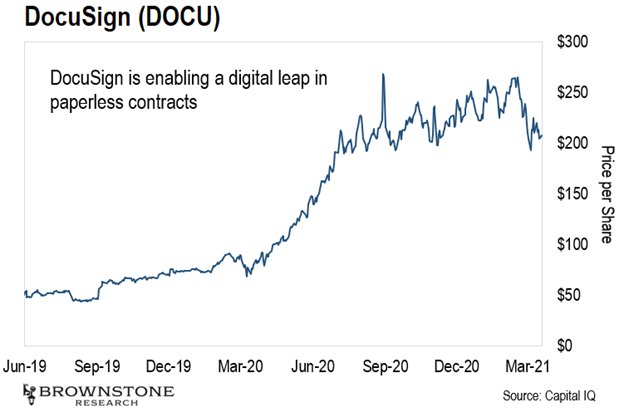 It may sound strange to say that anything “good” resulted from the economic lockdowns. But for companies powering these digital leaps, 2020 was a banner year.

In many ways, these companies have been waiting for a catalyst like this. Jeff likes to say they have been “lying in wait.” They needed some major event that would “force” the world to use their products and services. Our response to COVID-19 was that event.

Pick almost any technology you want, and you’ll see that its adoption has been pulled in by five to ten years.

And for any readers who missed these past digital leaps, we don’t have to worry. Because Jeff just found what he believes is the next great investment opportunity.

We are in the early stages of the next digital leap. It has to do with the last major global industry to take a digital leap. This digital leap involves an $11.9 trillion industry. It’s an industry we all depend on. And yet, it’s been slow to adopt new technologies.

This will disrupt a massive industry and change all our lives for the better.

To get the full story, and to learn Jeff Brown’s top stock pick at the center of this digital leap, Jeff invites you to join him on Wednesday, April 7, at 8 pm ET.

On that date, Jeff Brown will reveal everything he learned and give details on his favorite investment play at the center of this story.

Again, that’s April 7 at 8 pm ET. Let’s be sure to mark that date on our calendar.

And if you want to make sure you don’t miss anything leading up to that date, please go here to sign up for Jeff Brown’s America’s Last Digital Leap Event . As an additional bonus, Jeff will share a special report with his top 10 predictions for 2021 with those who do.