If you don’t know, I didn’t start to make real, life-changing money until I starting scaling up on my biotech trades. Over the years, I’ve been able to understand what moves biotech stocks… and a lot of the times it’s due to a catalyst event.

However, when you’re first starting trading biotechs… you might be overwhelmed by all the information thrown at you. You see, biotech companies use their own lingo… and if you can understand what they’re saying… then the profits should follow with.

Now, there are specific terms that let me know whether a trade will be good or not… and I focus on those solely.

There are 5 terms that you should know if you want to start trading biotechs:

Before biotech or pharmaceutical companies market their treatments to consumers, they have to go through a grueling process. One of those processes is clinical trials.

Now, clinical trials are typically split up into three stages: Phase I, Phase II, and Phase III (sometimes you’ll see a Phase IV, but it’s not that common).

Additionally, they’ll test the treatment to see whether it’s safe, how tolerable people are to it, and whether the treatment works.

If the company gets the okay to move onto a Phase II trial.

In the Phase II trial, a small patient population would be used to determine the safety, and sometimes the efficacy, of the treatment.

Now, the Phase II trial is divided into Phase IIa and IIb, sometimes. A Phase IIa trial is primarily conducted in figure out the dosage for patients. On the other hand, a Phase IIb is used to test the initial efficacy (how effective the treatment is).

If the company moves onto the Phase III stage, there would be a large scale, full-fledged, and often pivotal, trial to test the treatment’s efficacy and safety. In other words, the Phase III clinical trial is conducted to confirm the effectiveness, monitor the side effects, as well as compare the drug to other commonly used treatments.

Now, this might all sound a bit confusing at first… but it gets easier. You see, all really have to do is see whether the data release is positive or negative.

For example, I actually made $5,600 on a biotech stock that released positive Phase I / IIA results recently.

You see, the company actually noted the treatment was effective and “detected immune responses to 93%…”

Here’s a look at the press release.

Not too long after, I spotted a buying opportunity… and with good data just a few weeks prior to when I got in… it could still run higher. 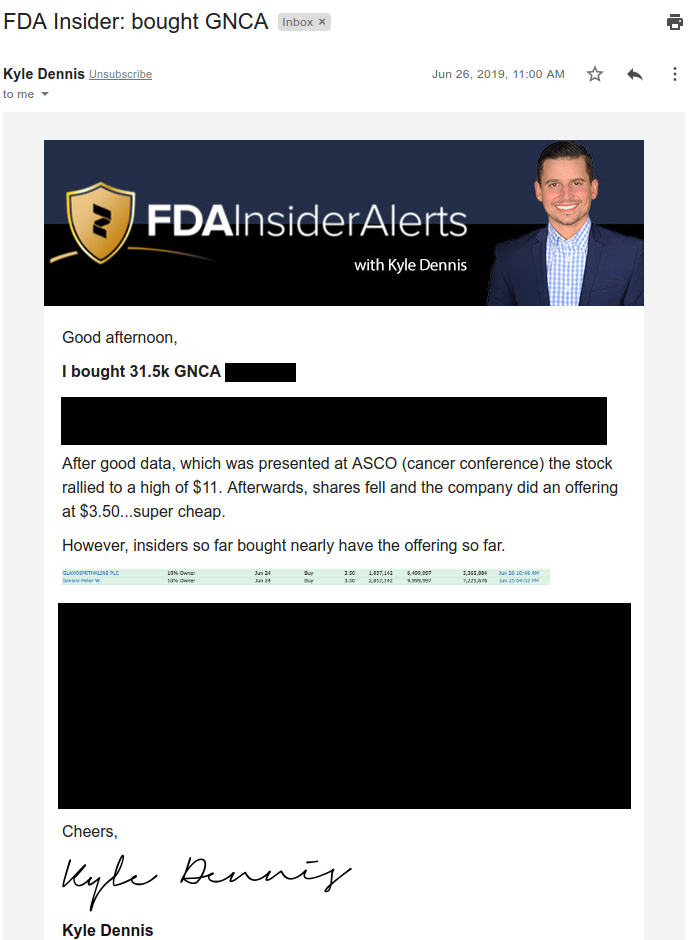 (Looking for biotech alerts? Click here to receive alerts to trades like this one in GNCA… in real-time) 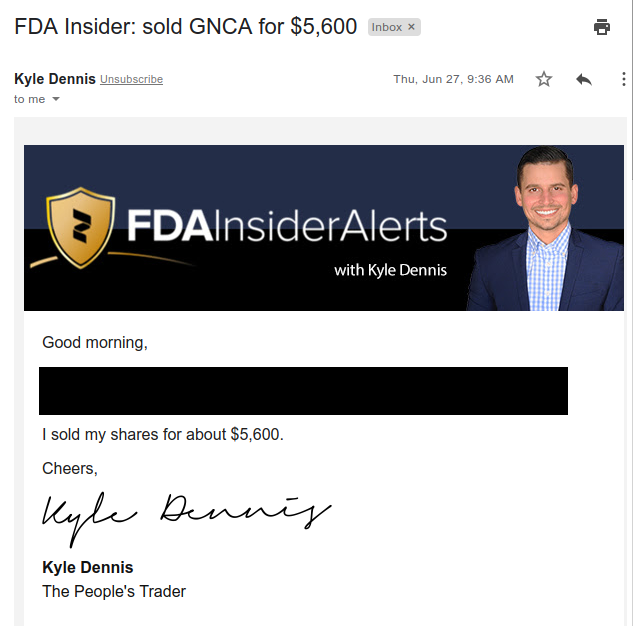 (If you want to learn how to profit from biotech stocks, click here to find out more about the strategy that turned me into a millionaire)

However, as regulations have become stricter, the FDA has started asking for more and more data for the 510(k), making it almost equivalent to an early approval form.

When a company gets 510(K) approval, that’s really bullish… and you can actually spot plays from that.

Well, if they’re approved, they move closer to being able to generate revenues and earnings from the product… which causes the stock to run up, as traders price this in.

I’ll often look to see whether companies have upcoming 510(K) approval dates, pair it with a bullish chart pattern, for the catalyst runup. 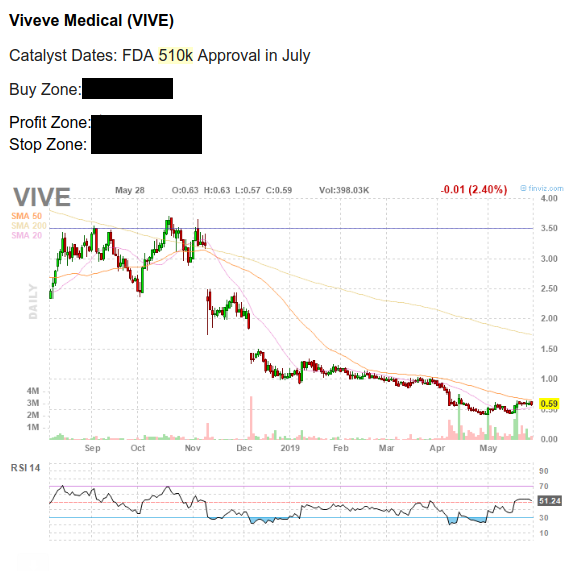 (If you want to be a part of FDA Insider Alerts and receive my biotech and pharma watchlists, as well as real-time alerts and so much more… click here to take advantage of the 80% discount NOW)

Moving on, the next term is an important one. It’s the Prescription Drug User Fee Act (PDUFA)

PDUFA is both a law and a procedural step. Now Congress passed PDUFA, which allows drug sponsors to pay the FDA a fee to study their New Drug Application (NDA)  and approve or reject the drug candidate.

Now, as a procedural step, it is the particular day on which the U.S. Food and Drug Administration (FDA) makes this decision, and it’s one of the most important catalysts in the premarket lifecycle of a drug candidate.

Basically, this is known as the FDA approval date. If the treatment gets approved… then look for the stock to gap up… if it isn’t approved, well… the stock will probably drop.

Again, this is another term that I look for and pair with a bullish chart pattern… and let my clients know my exact plan. 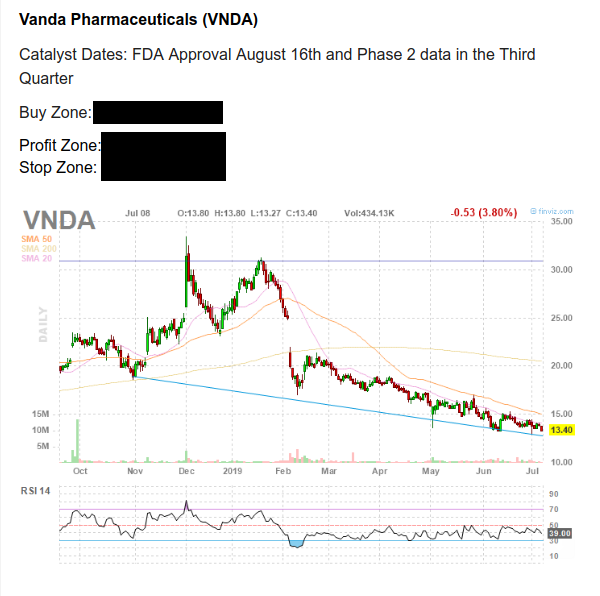 Now, I actually mentioned the next term just before when I was talking about PDUFA.

The NDA is an application made by the sponsor of a drug candidate to the FDA before or during the Phase III trial.

The primary goals of an NDA are to determine whether the treatment is safe and effective and if the benefits of the treatment outweigh the potential risks.

Basically, the NDA should provide the FDA with enough data for it to determine if the proposed labeling is appropriate and what other information it should contain. Moreover, there should be data that describes the manufacturing methods and quality control.

If the NDA is approved, the sponsor can market the drug in the U.S. On the other hand, the application could be rejected outright. However, this is quite rare. The FDA could also ask for more data, or another trial, or for further clarifications.

An Adcomm, or Advisory Committee meeting, is often summoned by the FDA a month before the PDUFA and consists of a dozen or so outside experts, a patients advocacy representative, and a non-voting industry expert.

At the end of the discussion, they vote to approve or reject a drug. This decision is non-binding for the FDA, but is often indicative of the PDUFA decision.

That said, it’s critical to know when adcomm dates are, especially if you’re trading biotech stocks. For example, if the meeting vote was a clear cut “No” that tells you to shy away from buying the stock until there’s another potential positive catalyst.

As you can see, understanding these terms can help you uncover opportunities in the biotech and pharma stocks. Now, if you’re ready to find massive catalyst trades in these stocks, then take advantage of my FDA Insider Alerts today.