The Bureau of Labor Statistics released its NonFarm Payrolls report this morning, and it blew expectations out of the water.

However, when the numbers were released it showed that it added 224,000 new jobs.

That’s way better than anyone expected…

And that’s a problem.

With the stock market at all-time highs, you typically would want to see a strong labor market.

However, stocks have partly surged because the market is anticipating the Fed to cut rates this year.

And that’s the thing…

Market participants are expecting the Fed to cut rates this month.

And which options strategies can we use to take advantage of the situation?

I know we are 26 days away from a Fed decision but there are opportunities we can take advantage of before that, and I’m going to tell you what they are.

The Fed’s Next Move

If you haven’t heard, the Federal Open Market Committee (FOMC) is meeting on July 30 – 31 to discuss monetary policy.

Now, the market’s march to all-time highs has been largely due to the traders placing a lot of faith in the Fed to cut rates… and they think there will be a 100% chance of a rate cut.’

However, that all changed with the strong jobs report this morning.

Check out the CME FedWatch Tool. 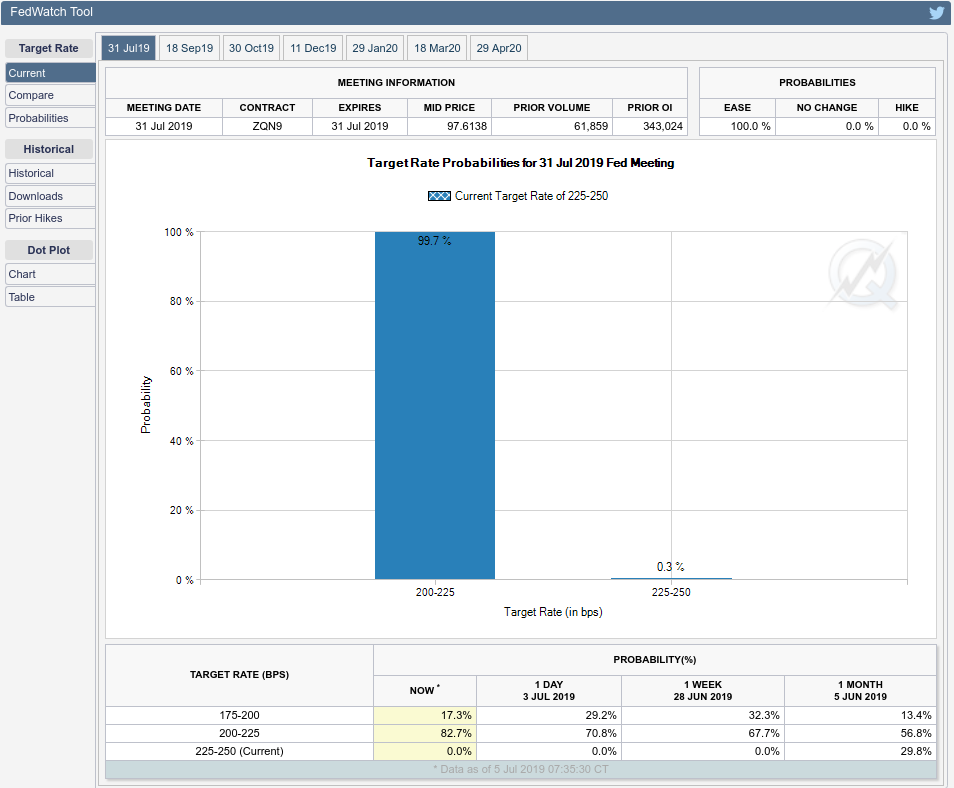 Right now, traders are looking for a 0.25% rate cut, and only placing a 0.30% probability that rates will remain unchanged.

Here’s a look at the hourly chart in the SPDR S&P 500 ETF (SPY) heading into the jobs report. 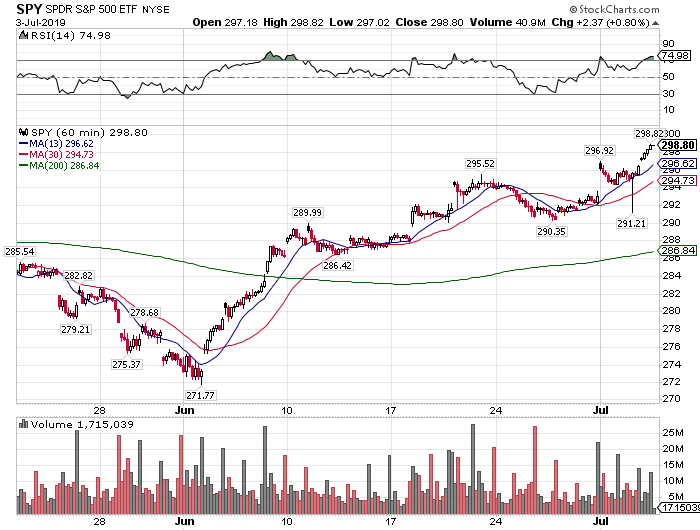 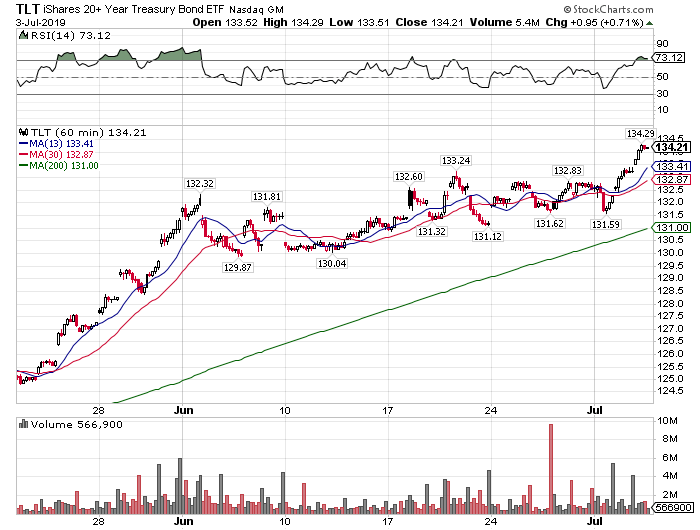 We typically don’t see stocks and bonds move in the same direction, especially if there are clues that the economy is slowing (which we’ve been seeing consistently). In other words, there’s a large disconnect.

Right now, the market is so disconnected that good news is actually bad news for stocks and bonds.

Payroll gains rebounded in June, as the U.S. economy added 224K jobs, with unemployment at 3.7% (still near 50-year lows) and wage growth came in line with consensus expectations, just coming in 0.1% below the estimates.

With this strong jobs report, it actually sent stocks and bonds lower this morning.

Well, the markets have been anticipating a rate cut at the end of the month. This new data point actually relieves some pressure from the Fed to raise rates.

You see, with nonfarm payrolls coming in at 224K, while the consensus estimate was 166K… that growth is way above the levels that have prompted the Fed to cut rates before.

However, the Fed won’t be basing its decision to cut rates or not solely on this one jobs report… but this could cause the FOMC to look for fewer rate cuts during the second half of 2019.

The Fed typically doesn’t like to look at just one jobs report. Instead, they like to average the jobs reports of a three- or six-month period. Not only that, but we’ve got some other major economic data points coming out ahead of the Fed meeting.

Economic Indicators to Keep on the Radar

The jobs report isn’t going to be the only economic indicator the Fed will be analyzing before its meeting at the end of the month.

Now, like the Fed, I’m data-dependent… and I’m going to analyze the macros before I make any drastic moves in my portfolio. Some economic indicators that I’ll be watching include:

Currently, we’re seeing traders place a lot of weight on a July rate cut… and it could be inevitable. We haven’t seen the Fed disappoint when the implied odds reach 100% in the last 25 years… but you never know with Fed Chair Jerome Powell and other Fed policymakers.

If we do in fact see a rate cut at the end of this month… that’s a sign that the economy is weak, which could cause stocks to crash… but I’m not going to go out on a limb and start getting real heavy on shorts.

The market is getting a little shaky at these levels, as we’ve just seen TLT gap down on a good jobs report… 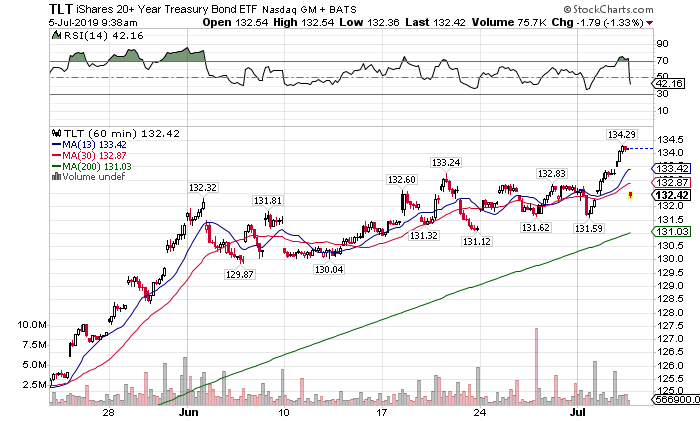 … and SPY also gapping down. 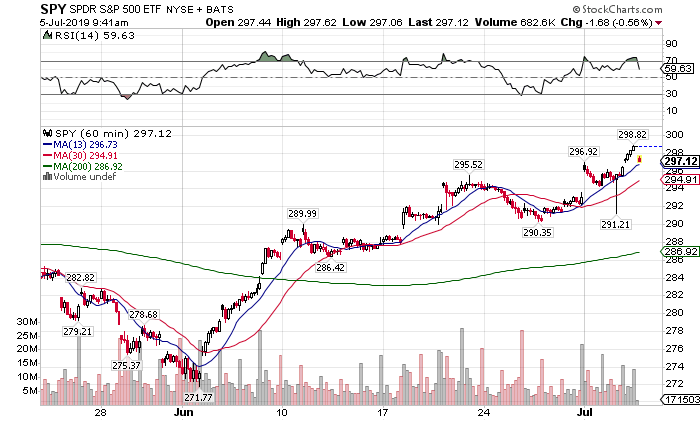 It’s quite clear that the market is dependent on the FOMC and is just waiting for a rate cut now. However, the Fed will be focused on upcoming inflation numbers soon, and that will really give the market a clue as to whether we have a rate cut or not.

Even though traders are looking for a rate cut… that doesn’t mean the FOMC will bend the knee and actually listen to traders if the macros don’t line up.

That said, I’m going to be following the Fed very closely, as well as analyzing key data points… and I’ll be sure to let clients know if I make any moves in SPY, TLT, QQQ, or in some specific stocks on my radar.