I’m sure someone at some point has told you before: You have to get in on the cannabis “gold rush” before it’s too late. But let me tell you something, it’s not all glitz and glam in the industry. In fact, pot stocks get a bad rap for a reason.

A few rotten apples run these companies with one goal in mind — to scam investors and line their pockets with millions of stolen dollars… as they buy an obscene amount of luxury items with investors’ hard-earned cash.

Today, I’ve got a story that will grind your gears that involves a duo who defrauded investors of more than $4.85M… and there’s a lesson to be learned here.

Guy Scott Griffithe and Robert William Russell controlled Green Acres Pharms, SMRB, and Renewable Technologies Solutions. This duo — with the aid of their companies — allegedly executed a scheme to defraud over 25 investors of at least $4.85 million with their recreational cannabis company securities offering.

Here’s how the elaborate scheme went down.

Griffithe and Russel sold fugazi (fake) ownership interests in Russel’s company, SMRB, to investors for 2.5 years. SMRB was a Washington state company that held a sacred license to grow and process pot under recreational cannabis laws. They could’ve done things the right way… but they chose not to.

Soon Griffithe and Russel began to sell securities through Griffithe’s companies Renewable Technologies Solutions and Green Acres Pharms. The duo claimed both these companies held a minority interest in SMRB.

Here’s the kicker: the dirty duo told investors that their hard-earned cash would go to the operation and the improvement of the SMRB’s cannabis business.

Of course, if you’re an investor and hear this… you would be enticed to put more money in. You see, by improving SMRB’s business it would result in a shower of profits that then would be distributed to investors quarterly. Of course, in direct proportion to what they put into the company.

Investors forked over millions to get in on this budding market (I don’t blame them, especially when you’ve got the head of companies telling you they’re trying to grow their businesses)… but if it sounds too good to be true, it probably is.

The worst part about this scheme is the fact the cannabis company securities sold by the duo sold to over 25 investors weren’t even worth the cost of a single rolling paper. They were 100% fake. The investors had no stake in SMRB… their money just disappeared. A $4.85 million trick played on investors.

What The Two Did With Millions Of Dollars

Disclaimer ── If you aren’t sitting down do so before reading this!

Griffithe would personally misappropriate over $1.8 million of investors’ funds.

What’d he do with all the money?

And that’s just the vehicles he was cruising down the highway in! He bought something he could cruise the sea in too, putting $25,000 towards 42 ft Hydrasport custom powerboat.

Russel and his wife Sonja Marie Russel would misuse investors funds to the tune of about $1.7 million. A majority of which went directly into their personal bank accounts.

But the Russel family wouldn’t be out shined by Griffithe’s new boat. Obviously, they need something bigger, better, and grander. Resulting in them buying an even larger boat ── I guess you could say yacht. $250K of what Russel took from investors went towards a 65 ft Pacific Mariner yacht. Which would make Griffithe 42 ft boat look like a child’s play toy.

The SEC is out to make an example.

They are seeking the return of the ill-gotten gains with interest and added civil penalties.

Hopefully, these 2 didn’t grow too used to their plush new toys.

Of course, we want to avoid companies like this at all costs.

So what’s my solution to this problem?

Let me show you how it all works.

In my most recent Fast 5 winner, I spotted a trade setup in Party City (PRTY). Of course, before I even put my money behind the idea… I conducted my due diligence.

Here’s exactly what I sent out to my clients: 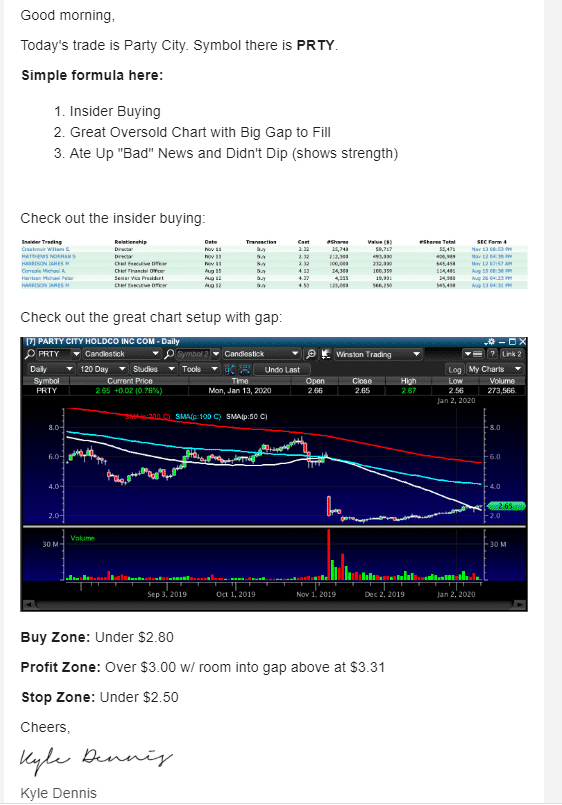 (Missed out on this alert? Sorry… but you don’t have to miss any more. Click here to see how Fast 5 Trades could help you achieve trading success)

If you look at the Fast 5 Trade alert above, everything was written out for my clients… all they had to do was execute. The best part: they didn’t have to worry about being caught up in a wild scheme.

Well, the holding period for Fast 5 Trades is 5 days or less. The goal is to be in on Monday and out before Friday. Let me break it down, and show you why this could be a solution for finding the best plays out there.

There was a positive catalyst (insider buying). Not only that, but there was a bullish chart setup. I don’t know about you… but if insiders are buying a stock, that’s a signal there could be some news on the way.

Of course, it’s not enough to just have a trade idea… it’s important to have a clear trade plan with buy, stop-loss, and target zones. Now, if you received the alert and followed the plan… you could’ve locked in a 15% winner real quick.

The best part: I don’t just alert Fast 5 clients and leave them hanging I actually break down the trade after.

Here’s a screenshot of what I sent out to clients after the trade went down… so they know what to do the next time they see a similar setup. 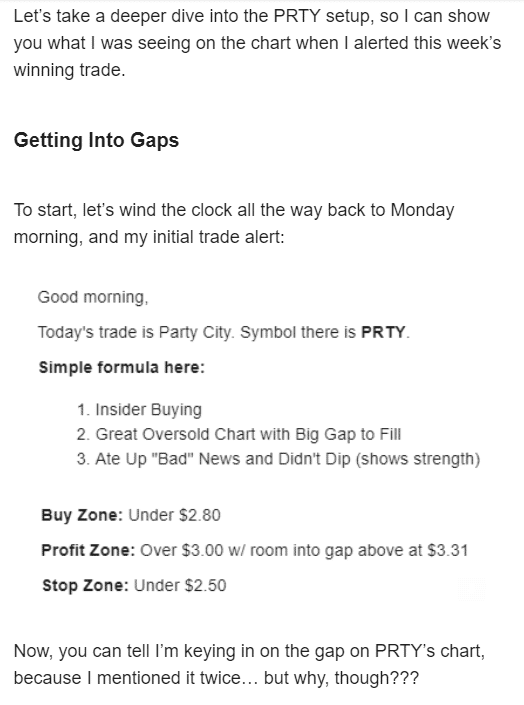 That’s really all it takes… execute the trade and wait for the trade break down to study it. That way, you could avoid getting caught up in Wall Street scandals.

Let Fast 5 Trades be your advantage in the sea of dirty players on Wall Street.