I’ve got something exciting to share with you today. Every day I get traders from Total Alpha, Bullseye, and even just random folks coming up on the street asking me where the market is headed.

That’s when I decided to put together an interview with Raging Bull’s Elite chatroom commentator and frequent Fox Business guest, Hitha Herzog.

There’s a lot of fear and uncertainty out there in the markets. I won’t tell you I have all the answers. What I can give you is my insights from decades of trading about what we can expect going forward.

Even more than that, let me add a little color to some of the topics I covered in the video.

Not Taking Long-Term Stakes Yet

In order for me to want to jump into this market, I have to have some idea about where I think things might be headed. At the moment, my ability to forecast this virus isn’t any better than what you see on television.

What we’re seeing now is unprecedented in every sense of the word. There’s nothing to compare it to no matter how hard you try. At no other time did a global pandemic become this widespread with a market running on easy money.

This week we saw the Fed fire nearly every bullet they had, which wasn’t much. Now, it’s up to lawmakers to figure out the rest… and that’s a frightening thought.

Flattening the curve for new infections saves lives but drags out economic shutdowns. The longer this drags out, the more likely we are to see systemic problems arise. I’m talking about bankruptcies that spiral into another credit crunch.

At the end of the day, I need to see new cases start to decline. That’s when we can start to survey the damage and see where things lie. Trying to guess before then is a great way to blow up your account.

Recently, I wrote about 5 things I’m doing in the market right now. I discussed how I’m reducing my position sizes and trading smaller. However, I wanted to expand on that with credit spreads.

Now, I can close these trades anytime before expiration for partial profit. In this market, that’s exactly what I’m doing. I don’t want to hold these trades for too long, hoping to get maximum profit. My goal here is to make singles until I’m confident things are ready to turn.

The majority of the time, I work as a swing trader. This market doesn’t exactly mesh well with that approach. So, I’ve adjusted to what’s out there.

Right now I’m trading against ranges. When the markets pop to the upper end of a range, I get bearish. At the bottom, I’ll get bullish.

With the S&P 500 ETF the SPY, I have a channel that’s being created by trendlines. Let me show you what I mean. 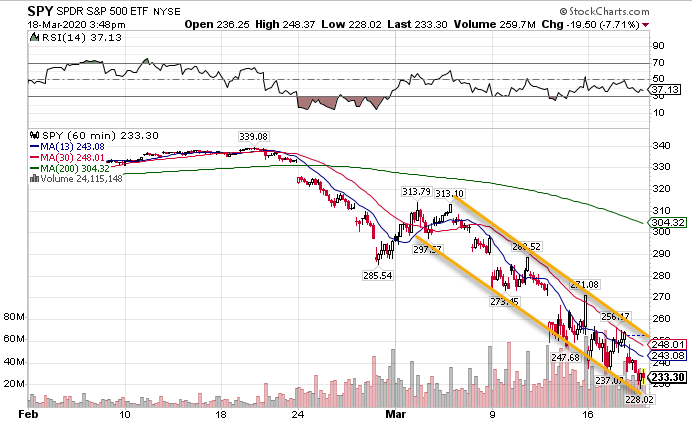 The orange lines connect the highs of the candlesticks and the lows of the candlesticks. This gives me a range where I can trade against. Mind you, these don’t have to be exact. Rather, they just need to be approximate to give me an idea of where to play.

I cannot stress enough the importance of learning all you can in times like these. It’s not enough to be a good trader, you need to be a great trader. Nothing prepares you for battle like information.

Just the other day, as I sat there thinking about a trade, I realized that I was overthinkng things. When I thought back to what I taught in the masterclass I knew the answer was obvious.

Sometimes, going over the basics helps us recenter and prepare for what’s ahead.

So, with most of us at home these days, take a moment and register for my free master class. Even if you know everything about options, it always helps to take a step back and review the basics.